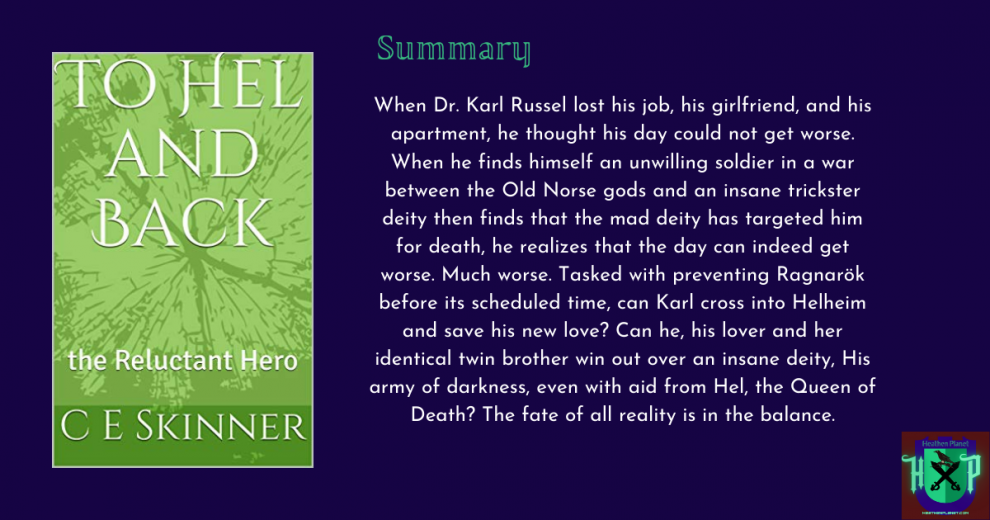 This is to be a review about To Hel and Back: The Reluctant Hero, by CE Skinner, and edited by Karen Skinner. Before I begin, however I must disclose that I have had the honor and privilege of knowing both of them for many years. They are friends, teachers, and kindred. They are Goði and Gyðja, and many times have we shared the feast horn.

With that said, I purchased my copy directly from the Amazon Kindle store. I have not received any compensation for this review. This is my honest review. The link and ad below for this book earn heathen planet a commission from Amazon if you make a purchase.

To Hel and Back The Reluctant Hero

To Hel and Back: The Reluctant Hero follows a suddenly down on his luck comparative religions professor, Karl who has the (mis)fortune of catching the attention of the Old Gods. It is an epic modern age hero saga with roots in the Norse sagas of old. Despite the disclaimers at the front of the book, Skinner is adept at weaving in numerous references and details of the old myths as a foundation for his tale.

When a drunk out of work professor, trips over a woman and she takes him home for a good shagging, I thought needs more character development. But then turns out that woman is a priestess of Freya. Skinner skillfully weaves his character development throughout the book instead of dreary chapters of background, I too often encounter.

The character type of the reluctant hero is fairly common in fiction. It makes for relatable characters who often become fan favorites when done well. I found Karl to be very relatable. Especially when he’s standing up for himself and telling off the old ones. There are plenty of other ways the reader relates to all three main characters. And Skinner brings the gods to life in a way that few before with quill and ink (or keyboard) have accomplished. I can easily picture them as he describes them.

While I won’t reveal many plot details, I assure you our reluctant hero and his companions, have an adventure worthy of being called a heroes saga. It’s a journey, of sacrifice, lessons learned, love found, love lost, love found again, and to save the nine worlds and existence itself. But at what cost? You’ll have to read the book to find out.

There are a few missed typos and such, but not enough to detract from the book overall. As a writer and editor, I understand. I found this book to be a page turner, and I look forward to the next in series, which is tentatively scheduled for release in February 2021. Can’t wait to see where this goes.

If you wish to read this book, you can purchase the Kindle Edition here. (Affiliate Link)