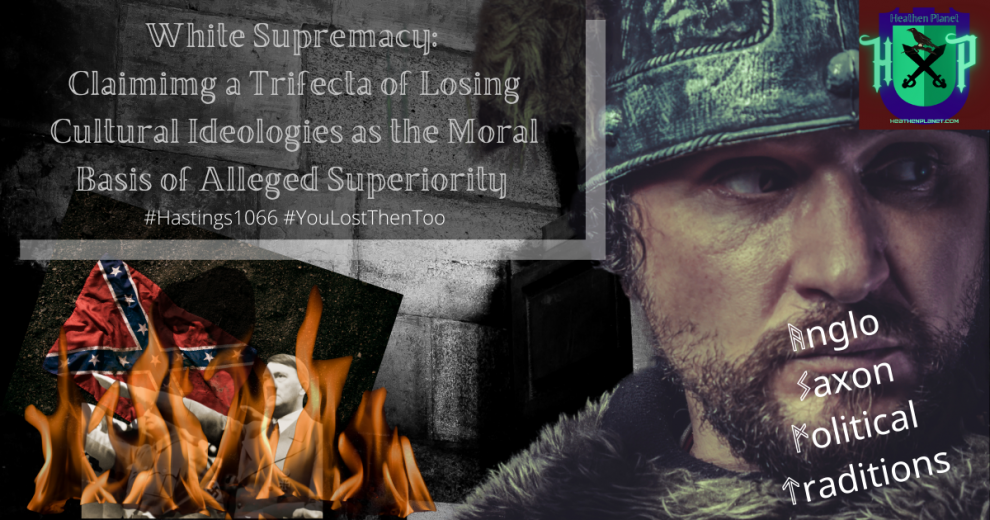 A hardliner conservative faction in the US House of Representatives, last week touted the formation of the America First Caucus whose positions include defense of America as a nation “strengthened by a common respect for uniquely Anglo-Saxon political traditions.”

This is racist dog whistle white supremacist garbage. Let’s talk about those Anglo Saxon political traditions and the racist bloat bags who espouse this sh*t.

The politicians involved have since started backpedaling since media got wind of it.

First, Anglo Saxon political dominance took place in England between about 450 and 1066 CE. The Anglo Saxon people were comprised of people from Germanic tribes who immigrated from continental Europe in the 5th century, as well as some native Britons who adapted Anglo Saxon culture after the Romans bailed out.

The class structure of Anglo Saxon culture was centered around three groups, the working man, the churchman, and the warrior. Christianity was reintroduced to the British Isles in the 6th century and mixed thoroughly with older British pagan religious beliefs. In the 7th century, smaller territories and kingdoms began to coalesce into larger kingdoms with Mercia being predominant.

During this period, there was no concept of patriotism or loyalty to a cause. Loyalty to a lord was loyalty to a person, not a title or cause in these times. So those lords and dynasties that were the strongest lasted the longest, but loyalties and elite rulers often changed and war was frequent.

During the 9th century Wessex, the kingdom of the Western Saxons rose in power and influence from foundations laid by King Egbert in the early quarter of the century. In the closing decades of the century, Alfred the great came to power. He was considered merciful and level headed and became the dominant ruler in England. Alfred reformed the legal system and military structure. He is also generally credited with making life better for his subjects.

The 10th century saw the Wessex kings extend their power first into Mercia, then the southern Danelaw (Viking settlement), and North Umbria effectively imposing their political will over all the peoples that became England. Wealth and power were the keywords of the day for the elite. Prestige of the crown grew with wealth and military might. Loyalty evolved to respect the institution or the title instead of the person as it had been in earlier Anglo Saxon history.

Anglo Saxon society saw three major invasions from the continent in the 11th century. The third of these invasions changed England forever. In 1066 French Duke, William the Bastard, of Normandy defeated the Saxon king Harold II at the battle of Hastings, becoming William the Conqueror.

After Hastings, William attempted to integrate Anglo Saxon nobility into his court. However continued English rebellion was violently put down by the Normans. After a large rebellion in 1069, William laid waste to the entire north of England, killing an estimated 100,000 Anglo Saxons, and mostly wiping the Saxon nobility from English history. In the great survey ordered in 1086 by William, of the 500 or so nobles listed as tenants of the king, only 13 had English (Anglo Saxon) names.

The Normans also banned the slave trade in England. And though they did institute feudalism, the argument has been made that life as a feudal serf under the Normans was a far cry better than slavery under the Anglo Saxons.

Now 1035 years later, we have a small segment of the American population who thinks somehow they are the supreme chosen race/tribe/people. We now have a few politicians blatantly working to “strengthen and protect” Anglo Saxon political traditions that “America was founded on.”

So which political traditions would that be? War, slavery, loyalty to the individual instead of patriotism, or the pagan influence on Christianity?

This America First doctrine has been preached by American white supremacists for decades. It espouses that somehow white Americans (W.A.S.P. or White Anglo Saxon Protestant) are superior to everyone else and should remove or block all others from the US.

White supremacist in America claim the causes of Nazism and the Confederate States of America as the moral basis for their alleged superiority. Now in the halls of power, they are claiming this third lost cause as their own. For a group of people trying so hard to demonstrate the alleged superiority of their antiquated ideologies, they sure do pick the worst losing causes to make their case. The Anglo Saxons lost to the Normans. The confederacy lost the American Civil War, and the Nazis lost to everybody.

It is said that the West Saxon king, Alfred the great was a strong proponent of education in the tenth century. Perhaps these hate filled meat puppets in congress can get on board with this particular Anglo Saxon political tradition and pass tuition free higher education for all American citizens. This would be a great first step in making America first in something other than our population of hate filled meat puppets.

Thanks for reading. I always appreciate a coffee. You caffeinate me here.